In case you haven’t noticed yet, I’m taking a winter break from updating this blog. Instead I’ve traveled back home to spend time with my family and friends, eat wonderful family recipes, make crafts, do puzzles, and learn how to bake banana bread… the only bread that will never turn out for me!

At the college where I work, I implemented Koha, an open source ILS, in 2008. The prison where I also work may lose their Microsoft licenses to another department and started experimenting with Koha this year. Even though it’s internet-based, they are able to run most, if not all, of it in the library. One of the inmates is a databases guy and he’s been doing most of the work.

In most US prisons, inmates get very little access to computers, and none to ‘the internet’. I’m especially taken with the idea of that “databases guy” inmate, and the possibility of a prison library providing an IT training opportunity via the libraries own IT, an end-run around current lack of training opportunities (obviously a key to avoiding recividism).

I asked on the…

On the prison library listserve, this mediation resource was shared. It is one that I’ve bookmarked, so I thought I’d share it as well. (To subscribe to the listserve, visit this website.)

Loyola University Maryland has the Bridge Project that’s mission is on the power of meditation. The project states that:

In prison the body is confined. The spirit and soul need not be. Thousands of inmates around the country are using their confinement to trigger an inward journey. They are traveling to a place of greater joy, peace, and freedom. You are invited to join in!

You might also be able to find or start a contemplative group in your institution. This is an inward journey but it sure helps to have companions.

To assist, we have included some inmate letters and an extensive resource list for those seeking information, help, and support in developing a meditative practice. Don’t hesitate to contact one or more of these groups.

Remember, as you embark on your journey, that love and energy surrounds you!

They offer resources via a website or a pdf that provides a list of organizations, what they have to offer people behind bars, and how to contact them. (FYI: The websites listed on their resource page do not work, but if you copy & paste the urls, they work just fine.)

Their resource website also links to a documentary called The Dhamma Brothers which is free to watch on Hulu. Below is a preview.

Starting January 16, Amy Cheney, who works with incarcerated kids at Alameda County (CA) Library’s Juvenile Hall, will be writing a new column for SLJTeen. The column, “YA Underground: Teen Books You Might Have Missed,” will run every other month and feature titles that are of interest to teens—particularly those who have grown up in poverty or are now incarcerated. Because juvenile detention facilities, like Amy’s, don’t typically allow kids to read “street lit,” she’s always on the lookout for books that will pique their interest, and many of these titles are perfect for your public library’s young adult section. So get ready for some great reads: fiction, nonfiction, adult books for teens, and graphic novels—they’ll all be highlighted in YA Underground! Put the January 16 issue of SLJTeen on your must-read list.

People’s lives have been changed not only by reading and discussing literature, but by writing creatively too. In Exeter, England, this has culminated in publishing a book of linked short stories and poems. This book is Lessons and it comes from Stories Connect—a community project, similar in format to Changing Lives Through Literature, that takes place outside prisons to help ex-offenders, substance misusers and other vulnerable people get over difficult times in their lives.

In 2011, after reading Alan Bennett’s Talking Heads and Andrea Levy’s Small Island, discussions centred on the significance of characters in storytelling, how our lives interconnect, and how perceptions of one another can be very different according to our individual experiences. Rather than read more texts to illustrate this, both the participants and facilitators of Stories Connect began a collaborative writing experiment.

Last month I put up my first library display at the university library that I work at.

The bulletin board I was able to put a display on is utilized for multicultural exhibits. So, for November’s Native American month, my display featured library books & movies, key leaders & events, and original documents from the American Indian Movement.

Although it is not in a prison library, I am super proud of it & making the display made me excited to do more! 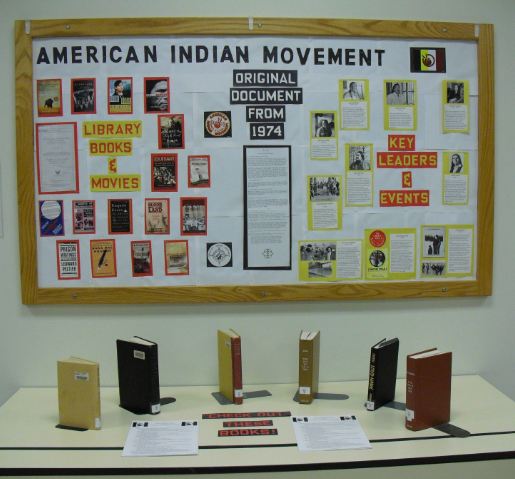 Last week was exciting as I made two trips to a nearby prison in preparation to gain clearance to spend my practicum with the Education Justice Project.

The first of my two days was the formalities of being welcomed to a correctional facility, but I was able to see more of the facility than I had at the EJP’s open house. We saw the medical building, the outside the industry building, etc. We were shown around by the Chaplin, who I asked as many possible questions as we were being processed for finger prints & more to gain our final approval.

When asked what he liked about his job, he spoke about making a difference; when asked about the biggest challenge, he discussed not having enough time to accomplish all he wanted to. I was surprised to find out that his duties included collecting and maintaining numerous library collections: one of each major religion (Christian, Jewish, Islamic, Buddhist, and I believe one more) as well as a collection for a bible school that began teaching classes.

The following day I was able to see most of his collection as well as be in my first general population prison library (unlike the EJP’s library which is only for their students). The general library was by chance open when we were there for law research. It was busy! Patrons were filling out forms, looking at law books, library workers were busy helping others and putting books away, and the counselor (who is the interim-librarian) was helping a handful of patrons with their questions. The interim-librarian showed us around briefly and as he had to assist patrons, a library worker showed us how to check out books, what patrons were currently working on, what his role is at the library, and… his homemade sign welcoming patrons to the arctic, for the heat was being replaced and almost everyone was in the gloves!

My primary reason for visiting was to spend time with the EJP’s library manager to discuss what I could potentially do to help out in their library with their library workers.

I was able to show her the catalog I began working on in Microsoft Access to help their collection be searchable on computers with the restriction of having no Internet access. Their current system is using Microsoft Excel and primarily printed out copies of the catalog sorted by title, author, and subject headings. Below are some screen shots of my work in progress (1st picture of searching page, 2nd of data entry): 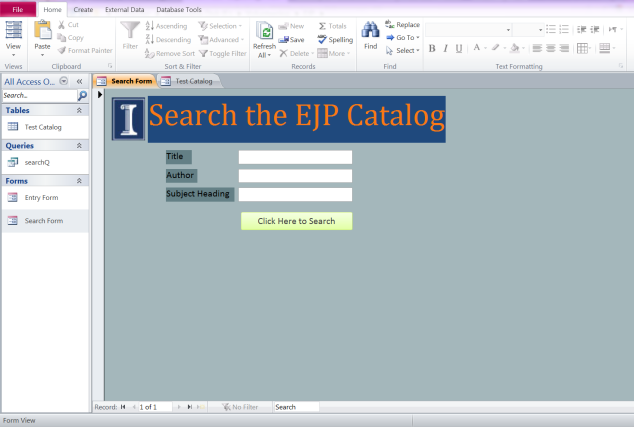 While discussing the potential new catalog, I was shown the library workers’ list of their own subject headings they want to use that is more friendly to them than the Library of Congress’ subject headings. Sandy Bergman would be proud!

By the end of our visit, we decided that for my practicum I will assist in:

1.) Library instruction- will provided to each of the six classes within the spring semester for patrons to become familiar with resources & searching

3.) Catalog support – help set realistic goal, assist in software research & recommendation (including making a catalog in Access); recommend how to catalog items that are not the traditional book

I’m very excited to continue working with the EJP, their library, and being able to work with their library workers… I can’t wait!